Voices from the nineteenth-century asylum

|  |  | Voices from the nineteenth-century asylum

The nineteenth century was a time of profound and radical change in Western society, not least in the area of science and medicine. Psychiatry, the branch of medicine that is concerned with mental disorders, was founded in the 1800s. The number of psychiatric hospitals in Europe and North America grew dramatically, and more people were admitted into such institutions with less distressing or disruptive experiences than in previous centuries.

Many people who were admitted into the asylums heard voices, but that didn’t necessarily mean that they were suffering from mental health problems. Throughout the nineteenth century, different explanations of voice-hearing existed alongside each other. Religious faith played a central role in most people’s lives and ordinary people made sense of their experiences in spiritual terms. Doctors, on the other hand, usually rejected religious explanations for voice-hearing, instead seeing such experiences as symptoms of a mental disorder.

A case published in the Journal of Mental Science in 1881 describes a 35-year old woman who was admitted into an asylum with ‘hallucinations of hearing’. Her doctor wrote that she ‘hears God telling her to work for His sake, and to pray for the other patients, or they will suddenly perish; hears Christ calling her His wife.’ The woman herself clearly felt that God was communicating with her. She is described as frequently praying for the other patients on the ward, and becoming upset if the attendants tried to interfere with her prayers. For her doctor, on the other hand, the voices were a symptom of insanity, and he diagnosed her with ‘religious mania’. While the case history doesn’t provide further details, we can guess that she stayed in the asylum for several months. Patients with similar symptoms were often treated with a combination of rest, a healthy diet, and occupational therapy. Diet in particular was seen as crucial for recovery, and patients who refused to food were sometimes force fed with a stomach pump, which would have been a frightening and unpleasant experience. Sometimes drugs were administered, especially when patients were in a very excited state, and suicidal patients were sometimes physically restrained to prevent them from hurting themselves. 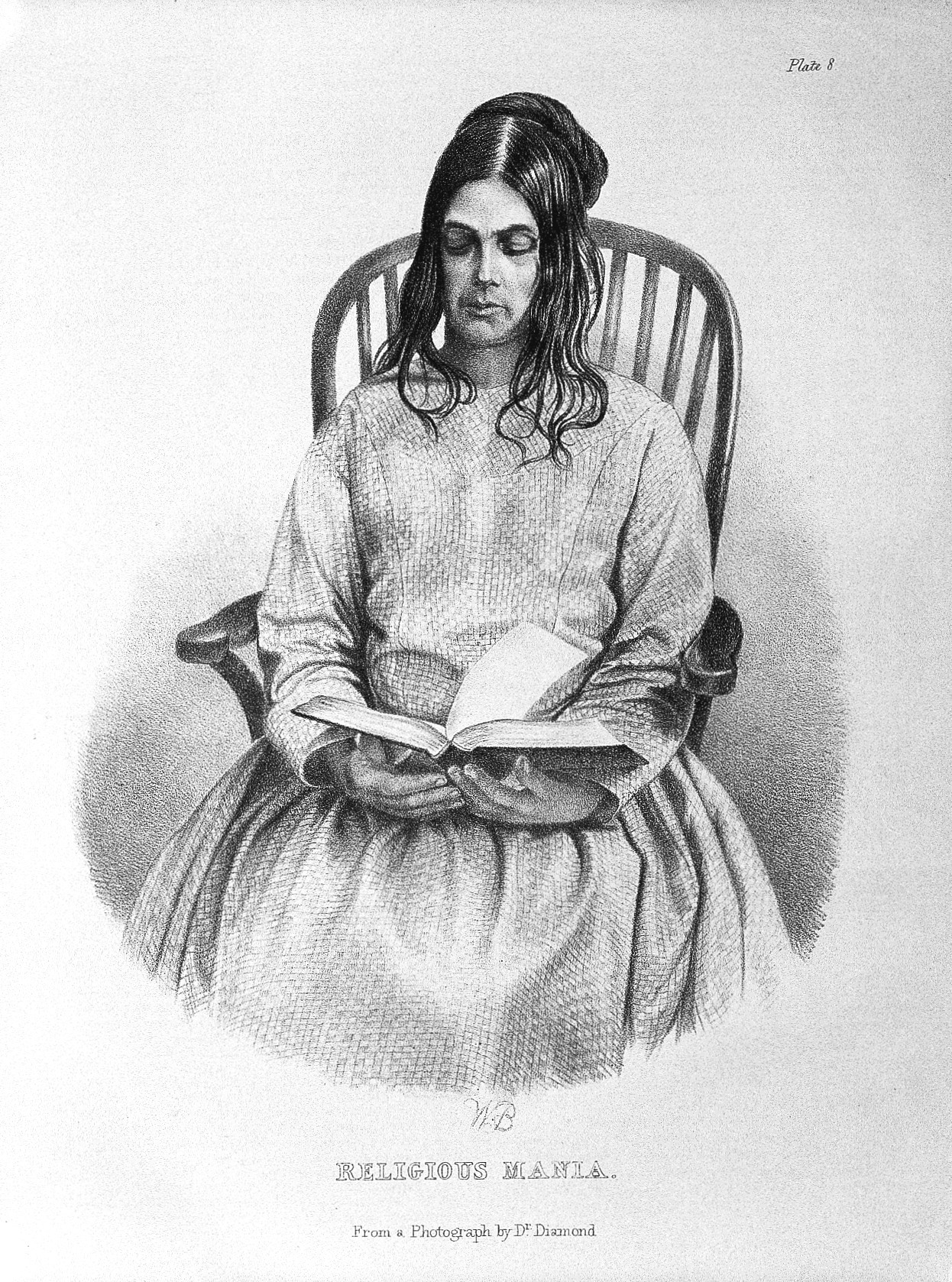 A woman believed to suffer from ‘religious mania’, a common diagnosis for people who heard spiritual voices. From the Medical Times and Gazette. Image credit: Wellcome Collection. CC BY.
Doctors distinguished between what they saw as ‘normal’ auditory experiences that most people had at some point in their life, such as hearing a voice or sound while in the state between sleeping and waking, and what they saw as symptoms of psychiatric illness. Hearing voices was often associated with psychological distress, such as depression and anxiety, but also with excited and manic states.

The women’s ward at St. Luke’s Hospital, London. Print by J.C. Stadler after A.C. Pugin and T. Rowlandson, 1809. Image credit: Wellcome Collection. CC BY.
A 29-year old woman was taken to a psychiatric hospital in 1878 after trying to commit suicide. According to her doctor, she ‘felt that she was doomed to everlasting punishment. She heard voices whispering bad words to her, and she saw evil spirits.’ It was very common for patients who suffered from depression to feel that they had fallen out of favour with God, and that their suffering was a form of divine punishment. Such explanations were, however, rejected by doctors. The medical attendant who treated this woman explained her spiritual suffering and the whispering voices as the result of a mental disorder, in this case ‘melancholia, followed by monomania of exaltation.’
In the nineteenth century, medical science became the dominant framework for explaining voice-hearing. But these medical explanations weren’t accepted by everyone, and they weren’t always the most helpful. Spiritual explanations gave people a sense of meaning to their voices, which was less likely to be found in the medical belief that voice-hearing was a symptom of underlying brain disorder.

Daniel Paul Schreber was a distinguished judge who lived in Germany in the late nineteenth century. In 1893, shortly after a major professional promotion, he developed a sense that something was wrong. He dreamt that a previous illness had returned, suffered from insomnia, heard unexplained crackling in the walls and woke up one morning thinking “that it really must be rather pleasant to be a woman succumbing to intercourse.” This “implanted idea” was “so foreign to [his] own nature” that Schreber sought the help of his doctor. He was admitted first to a university clinic and later transferred to the Sonnenstein Asylum, for a period of eight years.

During this time, Schreber believed that God was constantly persecuting him, seeking confirmation he had lost his reason; that he was being transformed into a woman in order to redeem the world; that his doctor was attempting to commit soul murder; and that he was the subject of a range of bodily and mental afflictions or “miracles.” He suffered as “mental tortures” the “nonsensical twaddle of voices” which would also mock, scold and shame him relentlessly.

Schreber wrote Memoirs of My Nervous Illness to support his (successful) legal petition to regain his freedom and be recognised as able to manage his own affairs. He published the Memoirs in the year following his return home, and this vivid and insightful account of his extraordinary experiences has been analysed by Jung, Freud, Lacan and other famous psychoanalysts, psychiatrists and social theorists over the last hundred years. There has been fierce disagreement as to the nature, meaning and significance of Schreber’s “madness.”

Even now I would count it a great triumph for my dialectical dexterity if through the present essay… I should achieve only the one result, to make the physicians shake their heads in doubt as to whether after all there was some truth in my so-called delusions and hallucinations.

Åsa Jansson (2017). Voices, visions and persons under the floor: ‘Delusions’ and ‘hallucinations’ in nineteenth-century psychiatry. Hearing the Voice.