In the Middle Ages, the existence of heaven, hell and a spirit world were taken for granted; anyone might encounter God, the Devil, angels, demons or ghosts. Some people actively pursued a direct connection with the divine, seeking visions – often involving more than one of the senses – as a means of increasing religious knowledge. Voices were often an important part of these visionary experiences.

In this section, we look at two women whose visionary experiences were written down in texts which continue to inspire Christians and fascinate historians today. If you would like to learn more about visionary experiences in the medieval period more broadly, you can listen to the podcast below.

One of the most influential records of voices and visions within the Christian tradition is The Book of Margery Kempe. Margery, who was to fourteen children, a beer-maker and owner of a failed domestic grain mill, chose a life of prayer, chastity, fasting and pilgrimage after a series of mystical experiences. Like most women of her time, she was illiterate. Dictated to scribes in the early fifteenth century, the Book is widely regarded to be the first autobiography in the English language.

Margery’s visions often involve more than one of the senses, and voices play a prominent role. The opens with an account of her suicidal despair after the birth of her first child, in which she experiences devils mauling her and shouting threats. She is consoled by a vision of Christ as a handsome young man sitting by her bedside, talking with her and addressing her as His daughter. Later, she describes an experience of hearing music so sweet that she leaps out of bed, thinking herself in paradise.

The Book is shaped by Margery’s conversations with the Lord, often described as visitations while she is praying or contemplating, and by experiences in which she sees not only with her ‘ghostly’ but also her ‘bodily’ eye. In her visions, Margery enters into a dramatic spiritual world where she takes part in Biblical history – assisting at Christ’s or making Mary ‘a hot drink of gruel and spiced wine’ to comfort her after His death. She is sometimes terrified by demonic visions, often grotesquely sexual. She repeatedly describes her mysterious ‘cryings’, the physical mark of her divine inspiration. Her weeping, often evoked by images of holy things, is compulsive, public and extreme: ‘krying and ’ breaking out however much she tries to contain it.

Margery’s extreme emotional responses and displays of loud wailing, writhing and weeping were often treated with scepticism by both and clergy in the communities in which she lived. She was tried for heresy multiple times in her life but never convicted. Exactly why she was accused is unclear, but possible reasons include preaching (which was forbidden to women), wearing all white even though she was married, and the challenges she posed to conventional versions of worship. One of the most interesting aspects of her life is her relationship with her husband, who she eventually managed to convince to live chastely with her.

Part of Margery Kempe’s significance today lies in the richly autobiographical nature of her book. She provides us not just with a spiritual and social commentary, but also with one of the most powerful insights we have into the experience of ordinary women in the Middle Ages. 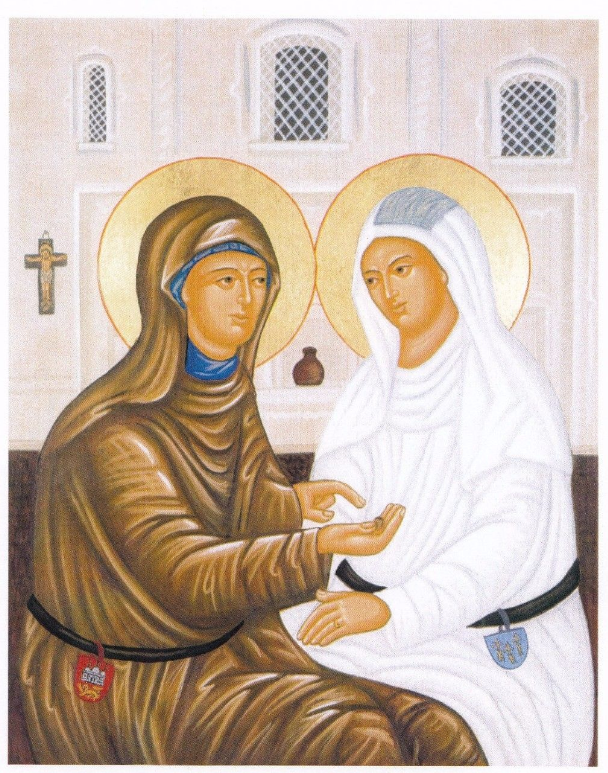 An icon by Brother Leon of Walsingham, depicting Margery Kempe’s visit to Julian of Norwich.

Julian of Norwich was an English mystic, who lived much of her life in permanent seclusion. Little is known for certain about her actual name, her family, or of her life before she became an anchorite.

An anchorite was someone who was walled into a cell to live a life of prayer and contemplation. Julian lived in a cell attached to St Julian’s Church in Norwich.

In 1373, aged just over 30 and suffering a illness, Julian experienced a series of sixteen visions or ‘shewings’ of Christ, the devil, heaven and hell. The Revelations of Divine Love documents and reflects on these experiences, offering an original interpretation of God’s nature and his relationship with humanity. Julian wrote two versions of the Revelations, a short text written soon after she experienced the visions and a longer text written twenty years later.

Many of Julian’s experiences have a conversational quality to them. For example, in one passage, God shows Julian a hazelnut. The nut is revealed to her as an image of creation – ‘all that is made’. She asks:

What can this be? I was amazed that it could last, for I thought that because of its littleness it would suddenly have fallen into nothing. And I was answered in my understanding: It lasts and always will, because God loves it; and thus everything has being through the love of God.

Around 1415, Julian was visited by Margery Kempe, who had been prompted by one of her voices to come to Julian’s cell and ask for her authoritative help in interpreting and validating her own mystical experiences. We don’t know exactly what the women discussed or what they made of each other, but, in Margery’s words, ‘Great was the holy conversation that the anchoress and this creature had through talking of the love of our Lord Jesus Christ for the many days that they were together.’

Otherworldly Encounters: Voices and Visions in the Medieval Period – A recorded lecture by Corinne Saunders, produced by Andrea Rangecroft for Hearing the Voice.

Hearing Voices in the Christian Mystical Tradition – A recorded lecture by Chris Cook, produced by Hearing the Voice.

Otherworldly Encounters: Voices and Visions in the Medieval Period – A recorded lecture by Corinne Saunders, produced by Andrea Rangecroft for Hearing the Voice.

Hearing Voices in the Christian Mystical Tradition – A recorded lecture by Chris Cook, produced by Hearing the Voice.

Visionary Voices – An online exhibition exploring the spiritual aspects of voice-hearing in the medieval period. Part of Hearing Voices: Suffering, inspiration and the Everyday.