Where people live, whether they are struggling financially, and access to educational and other opportunities have also been linked to voice-hearing in cases where people have a diagnosis of psychosis. For example, recent research in London found that povertyquestion icon and deprivationquestion icon can increase a person’s risk of developing psychosis, as can living in a city as opposed to a rural area. Inequality is also a contributing factor. Poor people living in neighbourhoods where richer people also live tend to have a greater risk of developing psychotic experiences than those living in neighbourhoods where most people have a similar income.

People from minority ethnic groups living in the UK are much more likely than white British people to be diagnosed with schizophrenia or other psychotic disorders. This is true regardless of whether they have been born in the UK or have migrated here from other countries. Exactly why this happens is unclear, but social exclusionquestion icon, deprivation, discriminationquestion icon, every-day and institutional racismquestion icon are known to contribute to the problem. 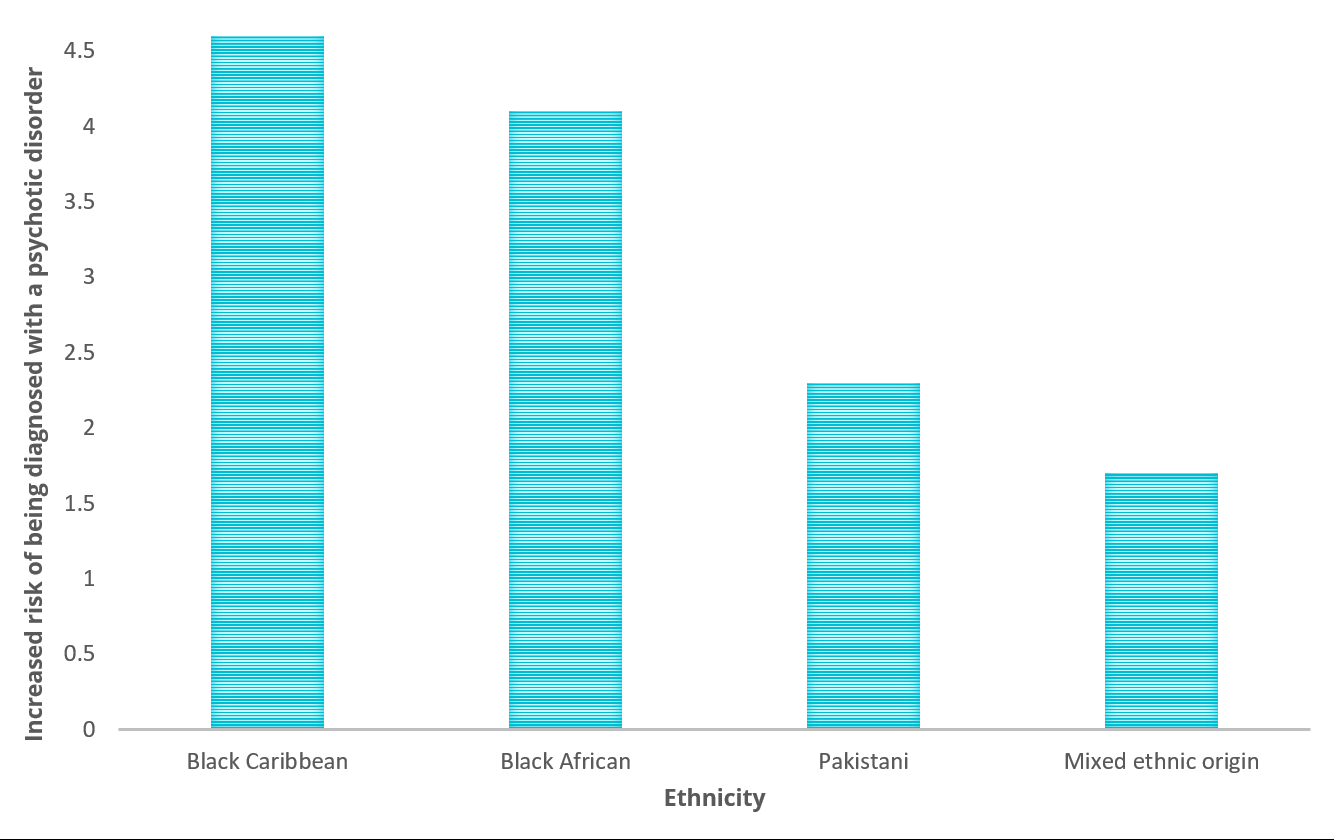 Ethnicity and risk of developing psychosis

Refugees are at a particularly high risk. A study of 1.3 million people in Sweden found that the incidence of psychosis amongst refugees was 3 times higher than in the Swedish population. Crucially, in this study, people who were refugees were 66% more likely to be diagnosed with psychotic disorders than non-refugee migrants from the same region.  This suggests is that the specific experiences of refugees, including war, famine, persecution and genocide, as well as the trauma associated with the journey may be contributing factors.

But while there seems to be a clear link between having a difficult life, social exclusion, racism and being diagnosed with schizophrenia or psychosis, less work has been done specifically on the relation between these factors and hearing voices. It does seem to be the case, though, that the more difficulties and dangers an individual is exposed to, the higher their likelihood of developing unusual experiences and beliefs, including hearing voices. Some studies in the US have suggested that, in certain African American communities at least, high rates of abuse, poverty, gang violence, drug use and repeated experience of racism are reflected in the nature of the voices people experience – what they are like, what they say, and the meanings people attribute to them.

When we come into contact with services, those of us from BME backgrounds, and especially young black men, are more likely than others to receive a diagnosis of schizophrenia, even if the problems we are experiencing are much the same. We are also more likely to be detained (‘sectioned’), subjected to solitary confinement (‘seclusion’), medicated against our will, and given higher doses. This difference appears to be the result of misunderstanding, discrimination and stereotyping within services. Most people assume that racism refers to people being personally racist – for example, engaging in overtly and explicitly racist verbal abuse or actively treating people differently because of their ethnicity. However, a series of government inquiries have identified that, within institutions like the police or health service, people from black and minority ethnic backgrounds can end up being treated differently even if individual members of those institutions do not individually act in this way: this is known as institutional racism … As a result of this institutional racism people are also less likely to seek help early, and this can lead to a vicious circle.

Vaughan Bell (2016). The Mystery of Urban Psychosis. The Atlantic.

Jason McIntyre and Richard Bentall (2017). Immigrants suffer higher rates of psychosis – here’s how to start helping them. The Conversation.