Spiritualism refers to a religious or spiritual movement that began in upstate New York in the mid-1800s.

In 1848, two sisters, Maggie and Kate Fox, reported hearing ‘rappings’ and ‘knocks’ that they then interpreted as communication from a spirit trapped in their house. Combining with other similar movements, Spiritualism grew in popularity and spread across the globe.

Whether or not Spiritualism is properly understood as a religion, it is typically characterised by a twofold belief about life after death:

Spiritualists – often called psychics or mediums – who ‘hear’ the spirits are said to be experiencing ‘clairaudience’. This may occur when attempting to establish contact with a particular deceased person on behalf of the medium’s client, or it may occur when the medium is alone and receives messages for themselves or unspecified others. 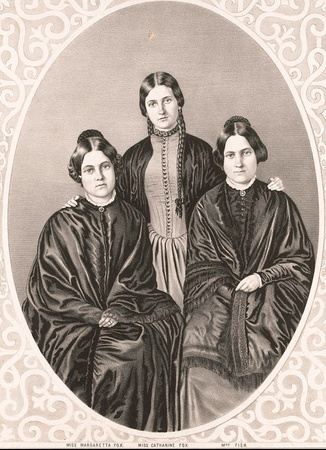 The Fox sisters. From left to right: Margaret, Kate and Leah. Image credit: Library of Congress.

Several studies suggest that mediums hear voices in a similar way, and with similar frequency, as voice-hearers with a diagnosis of psychosis. For instance, both commonly experience their earliest voices as teens or young adults, may hear voices outside of their heads, in the room, or just beyond the room in which the experience takes place, and come to experience voices on a daily basis. Indeed, some researchers point to Spiritualism as evidence that voice-hearing is a normal part of being human and need not necessarily lead to mental health diagnoses or treatment.

On the other hand, this research also shows that mediums also report less psychological distress as a result of those experiences than voice-hearers with a psychiatric diagnosis, and have higher levels of control over their voices. The content of voices received by clairaudience is more positive and comforting than the content of voices experienced by those who seek mental health support.

…after my mother had died, when I was , and I had been staying with a relative and when I came back to the house that we shared, I sat at the table every evening, about eight o’clock, I heard mother’s voice, very, very distinctly…and she said, you know ‘don’t worry about me, I’m alright now’. Which is just the sort of thing that she would have

Experiencing control over the content and onset of one’s voices is not only one goal of several emerging therapies, but is central to spiritual mediumship.

This has led the Vale do Amanhecer (‘Valley of the Dawn’) community in Brazil to view the learning of mediumship as a form of therapy.

Read more about this here.